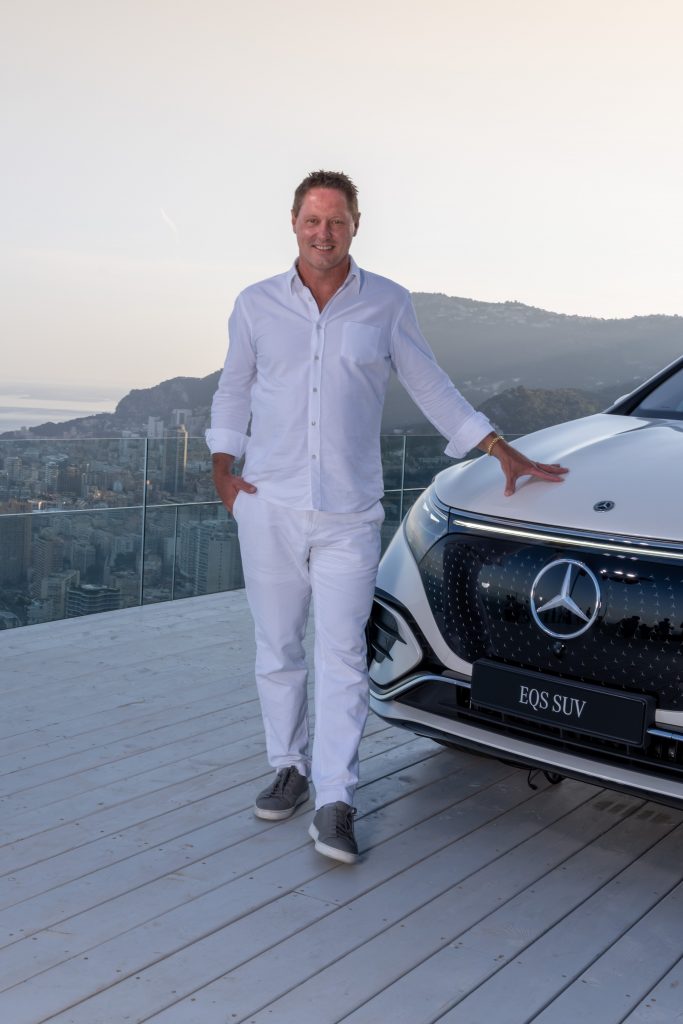 Gorden Wagener, one of the most influential automotive designers in recent times, has headed the global design division of Mercedes-Benz and all its brands since 2008. He has been the company’s Chief Design Officer since 2016. His goal is to build the most desirable cars in the world for the brands of the Mercedes‑Benz Group. Wagener approaches this ambition with his design philosophy of “Sensual Purity,” which defines the specific luxury of the different brands.

Mercedes-Benz Design sets new impulses in luxury and satisfies a desire for beauty and the extraordinary.

We often hear about Mercedes-Benz Sensual Purity design philosophy. Can you give us an overview of what this philosophy encapsulates?

Important brands are characterised by their own special style – that’s what makes the difference. The style of our house, which we have continued to refine over the past 15 years, is our design philosophy of Sensual Purity. It is our aesthetic soul and the core of our brand DNA. With it, we have created independent product personalities and given all Mercedes brands an unmistakable appearance. Our design language uniquely combines beauty with the extraordinary. To create tension, for example, we link opposites – this deliberate bipolarity of emotion and intelligence characterises our designs. For us Sensual Purity is a leitmotif, but not a rigid frame. Of course, we pick up on current trends and developments. At the same time, we establish new trends ourselves with our design. 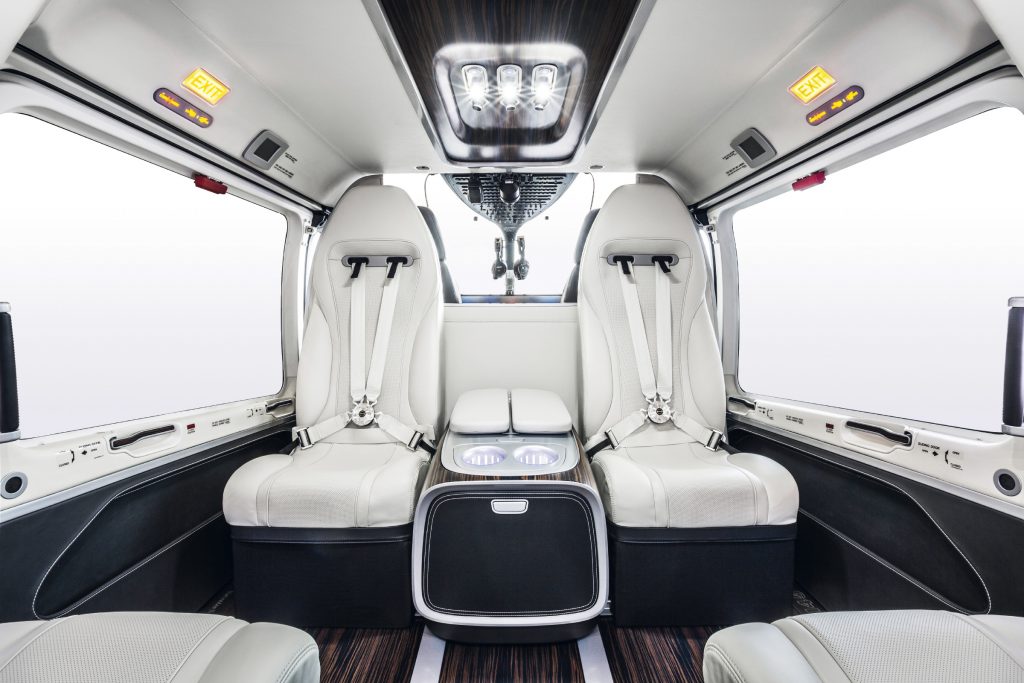 The luxurious interior of the Airbus Corporate Helicopters "ACH145 Mercedes-Benz Style" is since 2011 a testimonial to Mercedes-Benz's distinctive design. Tell us more about this project.

Already at the beginning of the 2000s, it was foreseeable that more and more attention would be paid to the interior of a vehicle. The times spent in it became longer and it became clear that a vehicle interior will not just be a place where you control a machine and get passengers from A to B. All human needs had to be increasingly taken into account in this room – to gain food, to communicate, to be entertained, to inform themselves and also to use the time to work without neglecting the requirements for safe driving. A beguiling exterior design has the task of awakening desirability, but of course the interior also has to strengthen the relationship between driver and a product for a long time. It can also be said that the external shape of a vehicle is at the very beginning of this relationship. It represents the first level of relationship through its beauty and aesthetics between user and product. In addition to beauty, the inner life must also have everything to strengthen the relationship by striving for a balance between technical, safety-relevant, production-relevant and functional necessities and the generation of human well-being. This was also the leading principle in the design of our first helicopter interior. Even with helicopters, the requirements that users have changed considerably. As with our later design for the aircraft cabin for Lufthansa Technik, the focus here was on the development of a holistic design concept and not on the completely isolated view of individual assemblies. This resulted in a concept that was also convincing to the numerous customers of the final 145 series “Mercedes-Benz Style”. We are still in close contact with our colleagues at AIRBUS Helicopters and discuss possible further developments. 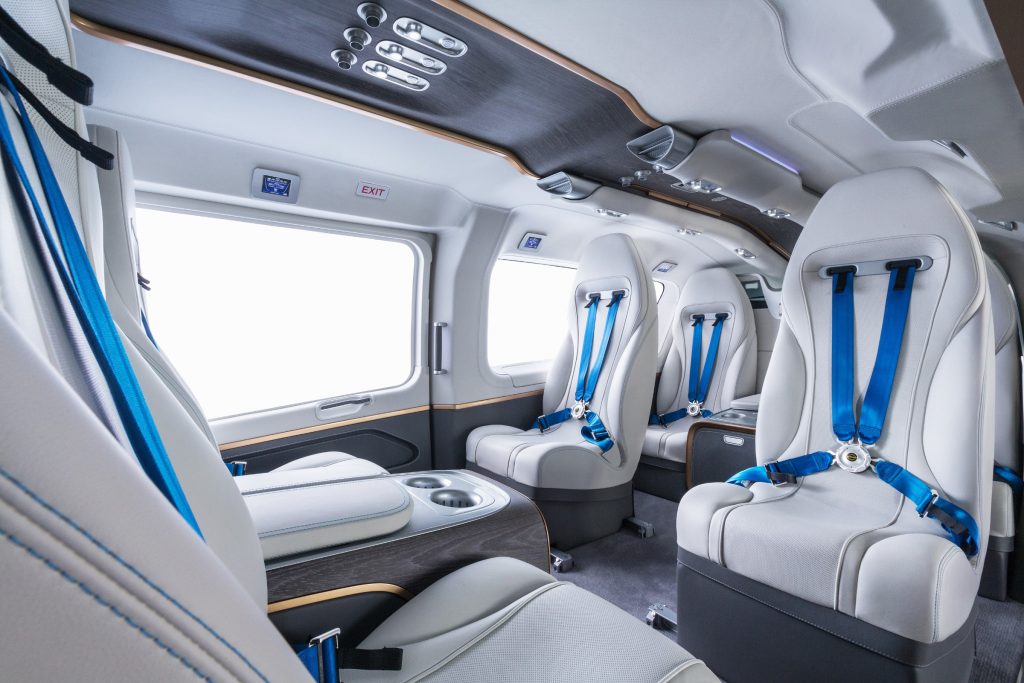 At the 2016 Monaco Yacht Show, Mercedes-Benz and Lufthansa Technik showcased a joint VIP Bizliner cabin concept. How were you able to translate the sensual purity design philosophy into such a large cabin?

The aircraft interior was the result of intensive cooperation between the two companies. The challenge for the designers at Mercedes-Benz was to develop a groundbreaking aesthetic that set completely new accents. The interpretation of the design philosophy of Sensual Purity created by us for an aircraft interior was in the foreground here. 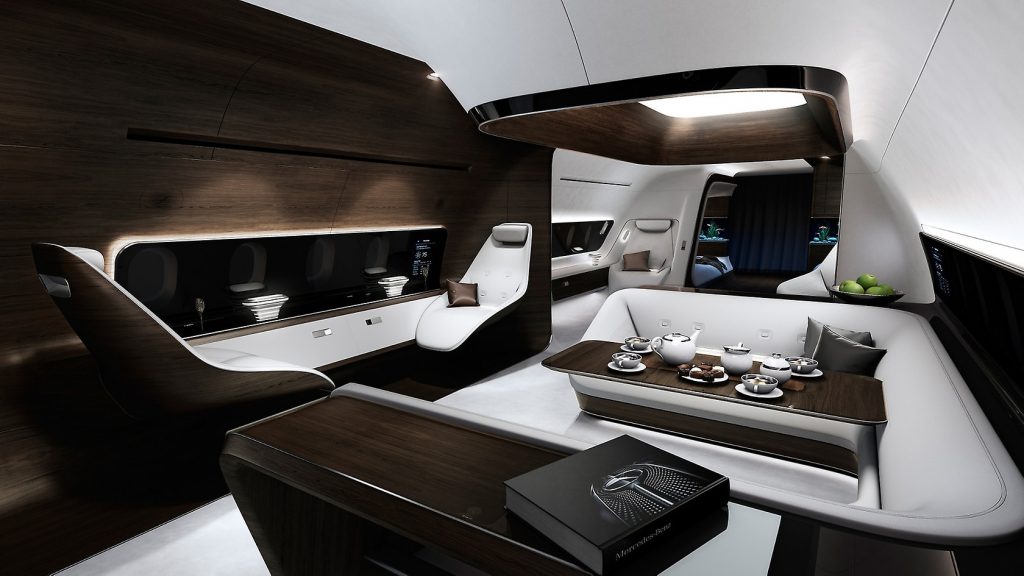 Dynamic lines and shapes have inspired people since time immemorial. They convey security and well-being. Feelings that you don’t want to miss, especially on a plane. So we left well-trodden paths by leaving the classic division into floor, seating, side walls and ceiling design. Instead, the interior dresses the cabin organically and homogeneously like a protective DNA helix and takes the passenger to the center. This formal principle made it possible to realize our conception of design even in a large aircraft cabin. It was necessary to develop an all-encompassing basic gesture in which the individual functional requirements can be integrated and not treated completely independently of each other. A completely unexpected and spectacular architecture could thus be created. Also in dealing with color, surface and material, a clear reference to our understanding of how we increase the sensual perception in space could be created. Human perception arises from the experience of contrasts, which we staged through light-dark, smooth-structured and softhard pairings. But technical innovations have also been incorporated into a large number of smart detail solutions – for example, the formal integration of screens. We were particularly proud of the fact that the developers at Lufthansa Technik succeeded in achieving a complete feasibility for production. 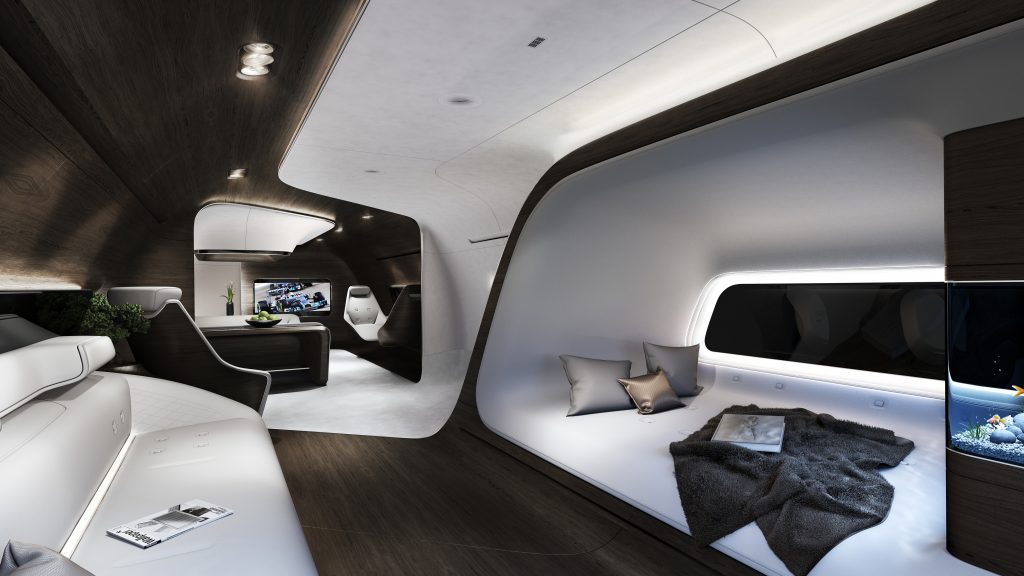 Mercedes-Benz is one of the rare automotive manufacturers that can claim a true "Air Mobility" experience. Do you foresee Mercedes-Benz transforming into a holistic luxury mobility brand of the future?

Bringing contemporary luxury to areas away from the automobile – that is the goal of Mercedes-Benz Style.