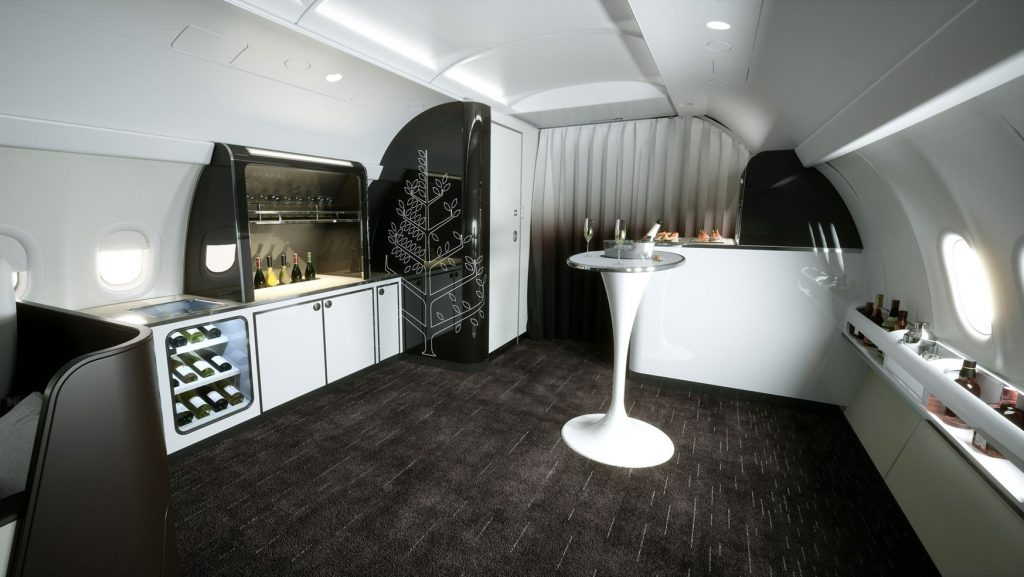 Airbus’ A321LR is one of the newest aircraft in its NEO[1] family, and features new engines and wingtip-mounted Sharklets – as well as extra fuel tanks in the cargo-hold. These features give the A321LR  the efficiency and range to fly nonstop to landmark sights around the world, while maintaining the ability to land at nearby airports. “Building on the tremendous success of our Private Jet program to date, with consistent sell outs, waitlists, and near perfect guest satisfaction rates, our drive to continuously innovate and push the conventional limits of travel has led to this new opportunity to experience Four Seasons like never before.”

“With the widest and tallest cabins of any aircraft in their class, Airbus corporate jets are wonderfully well suited to an aircruising role , helping to make journeys memorably enjoyable parts of exclusive travel experiences,” says ACJ President Benoit Defforge.

“Four Seasons’ A321LR cabin embodies décor that echoes the stylish elegance of its hotels, features seats crafted to look and feel good, and delivers unprecedented space for socialising and enjoyment,” says ACJ Head of Creative Design Sylvain Mariat who worked with Four Seasons on its creation. It features a spacious lounge, 48 lie-flat seats with Ottomans for face-to-face conversing, and two large washrooms.

Airbus’ A320 Family has an enviable reputation for comfort with both corporate jet and airline passengers, making it the most popular aircraft in its class. Designed to make multiple flights a day in airline service, the A320 brings proven reliability to private jet travel, as well as the intrinsic innovation of a modern design.

The A320 Family has won more than 15,000 firm orders, highlighting its role as the best-seller in its class. It is flying with more than 400 operators around the world, on every continent, including Antarctica.