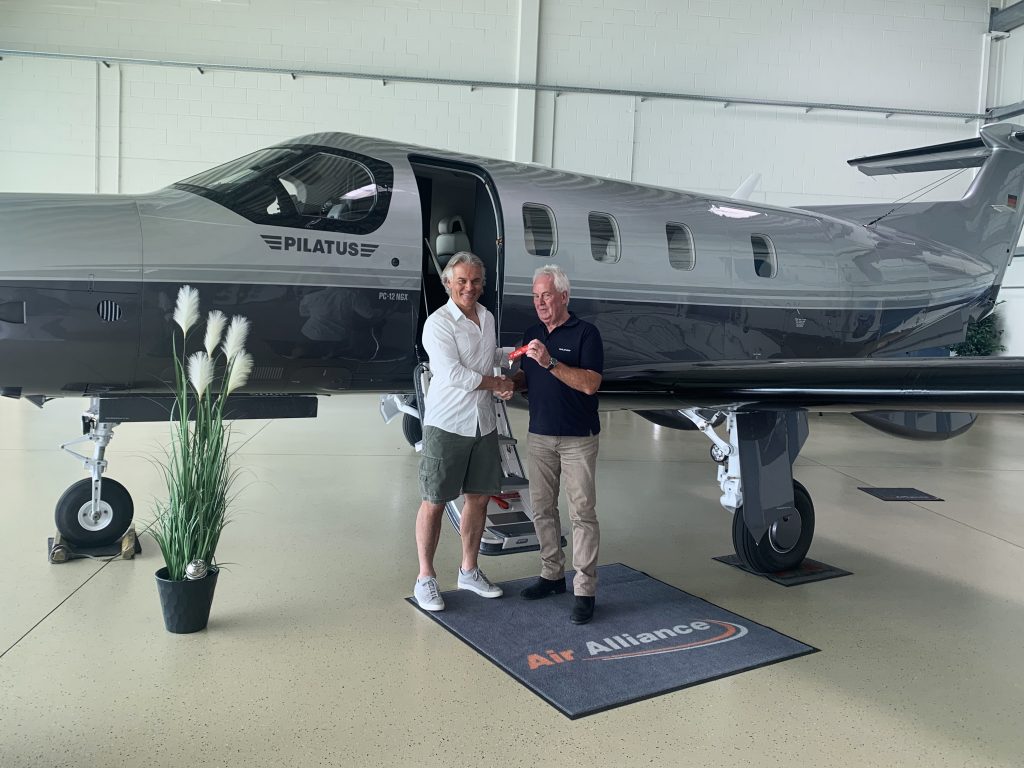 Pilatus and the global network of Authorised Pilatus Sales Centres began delivering the new PC 12 NGX advanced single-engine turboprop aircraft to customers around the world. Since its introduction, more than 1,750 PC-12s have been produced, with the venerable single holding the title of the business aviation industry’s top-selling pressurized aircraft for the past four years in a row.

The first delivery of the PC-12 NGX in the United States went to HP Inc. Director and former CEO, Dion Weisler. Through the Authorised Pilatus Sales and Service Centre Western Aircraft in Boise, Idaho, Weisler upgraded to the new model from his 2017 model year PC-12 NG, ordering his NGX as soon as Pilatus opened the order book last October.

After the first flight in his new PC-12 NGX, Weisler stated: “I really loved my NG, but the NGX takes the PC-12 to an entirely new level. There’s something for everyone: passengers enjoy the modern new cabin, and the auto-throttle, single power lever, and electronic engine controls are a pilot’s dream. I am also a staunch advocate for the new Traffic Alert & Collision Avoidance System II (TCAS) option with resolution advisories – the system proved its worth on our very first flight.”

In Europe, the first PC-12 NGX delivery went to Dr. Ulrich Byszio in Germany. Dr. Byszio, a pilot with a passion for all forms of aviation, moved from a popular light jet to his new PC-12 NGX. “The PC-12 NGX is the perfect aircraft for my travels around Europe. The combination of its speed, fuel efficiency, comfort and safety record make it ideal for both corporations and owner-pilots like myself. It offers an incredible level of versatility that can’t be matched by anything else in this class”, commented Dr. Byszio after taking delivery of his new NGX.

Additional PC-12 NGX launch customers from Brazil and the United States will be taking delivery of their new aircraft end of May and in June 2020.

Ignaz Gretener, VP General Aviation of Pilatus stated: “We are really excited to have both long-time and new members of the Pilatus family begin to take deliveries of the new PC-12 NGX. From the moment we announced it at NBAA BACE, the response exceeded our expectations. Our goal was to maintain leadership of the business and utility turboprop market by continuously adding value and bringing new technology to the segment. These first deliveries of the PC-12 NGX bear witness to our commitment to the market. We look forward to building strong, long-lasting relationships with new customers.”

The new PC-12 NGX is powered by the first Full Authority Digital Engine Control (FADEC) in a business turboprop aircraft. The PT6E-67XP engine on the PC 12 NGX features Pratt & Whitney Canada’s patented Electronic Propeller and Engine Control System (EPECS). This solid-state, dual-redundancy control system simplifies engine start, reduces pilot workload, and enables an unprecedented level of performance control and monitoring. While the PC 12 NGX’s engine is still thermodynamically rated at 1,845 shaft horse power (shp), the EPECS allows cruise flat-rated power to be increased ten percent to 1,100 shp, and extends the time between overhaul 42 percent to 5,000 hours. The maximum cruise speed of the PC-12 NGX is 290 knots (537 km/h), an increase of 30 knots (55 km/h) on the original model. Pilot workload is further reduced by the incorporation of single power lever, and a fully-integrated auto-throttle option on the PC-12 NGX, another first in a business turboprop aircraft.